R. Bruce Woodward is a retired Navy Captain and leader of the Richmond Consulting Group. His company works with the U.S. Navy and Coast Guard and private firms to support shipbuilding and repair contracts and contract proposals.

He also acts as an expert witness in cases involving mesothelioma and asbestos exposure and testifies on behalf of exposure victims on ships and in shipyards.

Woodruff’s career with the military began when he attended and graduated from the U.S. Naval Academy. He graduated with a degree in naval science and worked in several positions.

He was a chief engineer and main propulsion assistant, a repair officer, and a program manager on two separate ships. He ultimately became a commanding officer in charge of shipbuilding in Pascagoula, Mississippi.

He continued his naval and marine education with a graduate degree in mechanical and ocean engineering from MIT. He also attended the National Defense University, Industrial College of the Armed Forces.

After retiring from the military, Woodruff continued to use his expertise in shipbuilding and marine engineering. He became the vice president and a general division manager at Asea Brown Boveri Power Generation, Inc.

There, he worked in turbine manufacturing, overseeing operations, design, and engineering. He supervised 140 employees.

As the leader of Richmond Consulting Group, Woodruff continues his work with marine engineering, shipbuilding, and ship repair. He also uses his expert knowledge of ships and the U.S. Navy and Coast Guard to help recover damages for victims of asbestos exposure on ships and in shipyards.

He offers his expertise and services as an expert witness in litigation cases. He has provided testimony on behalf of more than seventy-five victims.

He has provided affidavits for shipyard workers who worked on nuclear submarines. In one particularly large case, he supported an Italian electrician who worked on cruise ships and was exposed to asbestos. 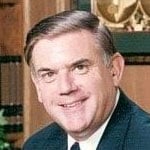